ava
We’re learning more details about the Muslim family that were targeted in a hate-motivated act on Sunday in London, Ontario. Salman Afzaal, 46, his wife Madiha Salman, 44, their 15-year-old daughter Yumna Afzaal and Salman Afzaal's 74-year-old mother were killed while out on an evening walk a 20-year-old man drove into the family with his truck. A child is recovering from his injuries. Jeff Semple has the latest details.

Federal and provincial leaders are in London, Ontario to attend a vigil for the slain family members. Farah Nasser reports on what was said about the anti-Muslim attack, how the victims are being remembered, and why some Muslims are growing more and more fearful when it comes to their personal safety.

The latest data from Statistics Canada shows hate crimes against Muslims rose by 9 per cent in 2019, the same year in which hate crimes against other religions dropped by 7 per cent. As Eric Sorensen reports, advocates say more needs to be done to combat growing Islamophobia.

The Canada-U.S. border has been closed for 15 months in an effort to curb the spread of COVID-19, fuelling frustrations in both country’s tourism industries. Mike Le Couteur reports on the rumours that restrictions may loosen soon, though the prime minister has yet to confirm a plan.

Finally, the tributes across the country for the Muslim family members killed on Sunday, and the trauma facing the community, which has grown all too familiar with anti-Muslim rhetoric and violence. 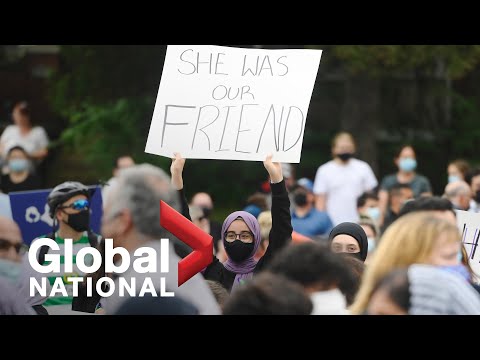 We’re learning more details about the Muslim family that were targeted in a hate-motivated act on Sunday in London, Ontario. Salman Afzaal, 46, his wi...