ASEAN set for talks with Myanmar military as crisis escalates

ava
ASEAN foreign ministers are preparing to hold virtual talks with a representative of Myanmar’s military on Tuesday, as anti-coup protesters returned to the streets in the main city of Yangon defying fresh threats from Senior General Min Aung Hlaing.
Singapore’s foreign minister Vivian Balakrishnan, in a televised interview late on Monday, said the Association of Southeast Asian Nations will tell the military it is appalled by the violence in Myanmar and call for the release of the country’s elected leader, Aung San Suu Kyi, and for the two sides to talk.
“Instability in any corner of Southeast Asia threatens and affects the rest of us,” he said, adding that the coup will cause “grievous damage to Myanmar’s society and economy”.
The military’s February 1 power grab has plunged Myanmar into chaos, drawing hundreds of thousands of people on to the streets of cities and towns across the country as doctors, teachers and other civil servants stop work in protest against the coup.
In the bloodiest crackdown yet, security forces opened fire on protesters on Sunday, killing at least 18 and wounding dozens more.
Al Jazeera's Jessica Washington reports.

ASEAN set for talks with Myanmar military as crisis escalates 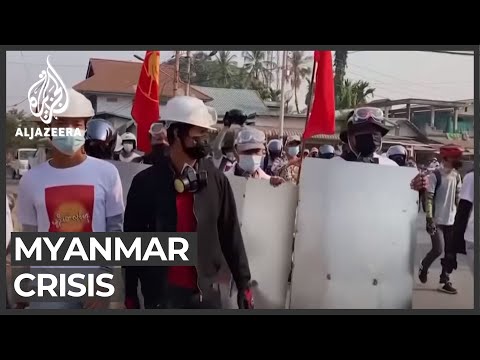 ASEAN foreign ministers are preparing to hold virtual talks with a representative of Myanmar’s military on Tuesday, as anti-coup protesters returned t...