ava
A move by Democrats in the United States House of Representatives requesting unanimous consent on a resolution calling on Vice-President Mike Pence to invoke the 25th Amendment to remove President Donald Trump from office was blocked by Republicans on Monday, forcing the House to reconvene Tuesday for a floor vote on the resolution.

Pence will have 24 hours to then invoke the 25th, otherwise the House will move forward with Impeachment.

"H. Res. 21, Calling on Vice President Michael R. Pence to convene and mobilize the principal officers of the executive departments of the Cabinet to activate section 4 of the 25th Amendment to declare President Donald J. Trump incapable of executing the duties of his office and to immediately exercise powers as acting President," the resolution read.

On Monday, Democrats formally introduced an article of impeachment against Trump for "inciting an insurrection" in connection to the riot that took place at the Capitol building last Wednesday.
Calls for Trump’s removal have been rapidly building momentum after thousands of his supporters violently stormed the U.S. Capitol on Wednesday in an attempt to prevent the certification of president-elect Joe Biden’s election win.

This will be the second time the Republican president faces impeachment. In December 2019, Trump became the third U.S. president to have ever been impeached. 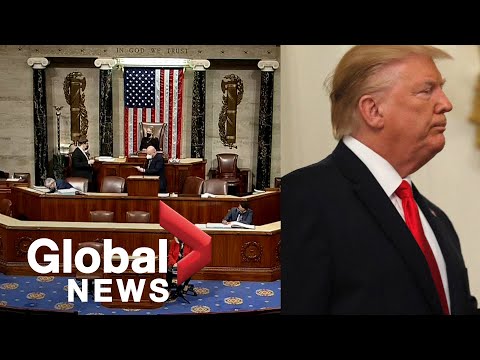 A move by Democrats in the United States House of Representatives requesting unanimous consent on a resolution calling on Vice-President Mike Pence to...