UK diplomat jumps into river to save drowning woman in China

The life of a foreign diplomat, one imagines, is a perpetual cycle of dinner parties, tourists with lost passports and some light espionage. But a British representative in China went full 007 by saving a drowning woman.
The woman, a student, had slipped and fallen off a bridge into a river in the ancient town of Zhongshan. As she floated face down under the bridge, Ellison, the British consul-general for the Chongqing municipality, whipped off his shoes and jumped into the river.

The 61-year-old, a keen triathlete, managed to reach the young woman and swim her to a bank where she was pulled out by locals.
‘There was not a lot of time to do anything other than to get in,’ Ellison told the BBC.

The student soon resumed breathing and regained consciousness, according to Chinese state-run news agency Xinhua, while Ellison, who has been hailed as a hero on Chinese social media, was given a cup of coffee and dry clothes by locals.

The two even managed to have a drink together afterwards, and the woman has invited the diplomat for dinner. Perhaps an aperitif, too. Martini, anyone?

#RT (Russia Today) is a global #news network broadcasting from Moscow, London, Paris and Washington studios to over 100 countries. RT is the first news channel to break the 1 billion YouTube views benchmark.

UK diplomat jumps into river to save drowning woman in China 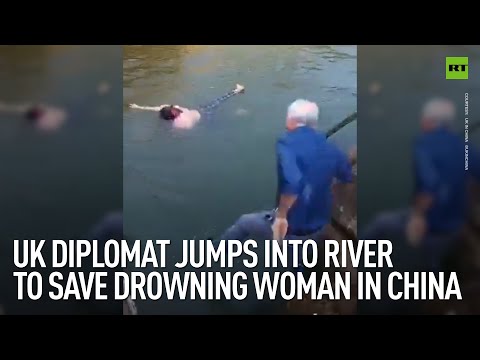 The name’s Ellison…Stephen Ellison. The life of a foreign diplomat, one imagines, is a perpetual cycle of dinner parties, tourists with lost passports...