ava
During a briefing in Pittsburgh on Wednesday, U.S. President Joe Biden unveiled key points in his American Jobs Plan, which he said would modernize transportation infrastructure, aim to “grow the economy in key ways,” make it “easier and more efficient” to move goods and make the country more competitive on the global state.

Biden announced a US$2 trillion infrastructure plan, that would include 20,000 miles of rebuilt roads, repairs to the 10 most economically important bridges in the country, the elimination of lead pipes and service lines from the nation's water supplies and a long list of other projects intended to create millions of jobs in the short run and strengthen American competitiveness in the long run.

It would also reportedly accelerate the fight against climate change by speeding up the shift to new, cleaner energy sources, and would help promote racial equity in the economy. The spending in the plan is estimated to take place over eight years, according to reports.

Plus, the president called for multinational corporations in the United States to pay higher federal income taxes, suggesting raising the rate to 28 per cent from 21 per cent. Biden added there are 91 Fortune 500 companies in the world, including Amazon, that use “various loopholes” to not pay federal income tax in the country. 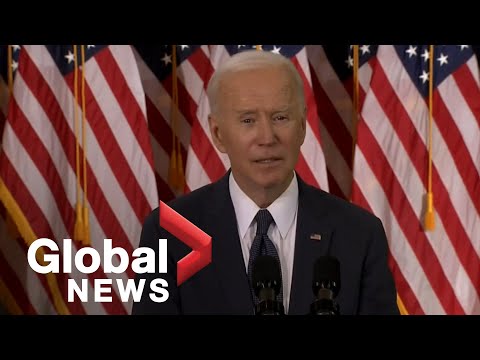 During a briefing in Pittsburgh on Wednesday, U.S. President Joe Biden unveiled key points in his American Jobs Plan, which he said would modernize tr...