Some 190 protesters were arrested and nine police officers were hurt in the clashes that ensued, Berlin police said. A tense standoff ensued, as police tried to convince the crowd to disperse amid cries of "We are the people!" and as some protesters started singing the national anthem.
Police officers in riot gear lined up to stop demonstrators from getting too close to the parliament building, seeking to avoid scenes from August when a similar protest reached the Reichstag parliament building. Back then, during a weekend demo, politicians were not in session.

Several lawmakers accused the far-right Alternative for Germany (AfD) of allowing some demonstrators to enter the parliament building. One woman held a guest badge meaning that she had been invited in, allegedly by an AfD politician. A video shared on Twitter showed the woman filming and insulting Economy Minister Peter Altmaier. The secretary-general of the center-left Social Democrats, Lars Klingbeil, called the behavior of the AfD "absolutely undemocratic," saying their aim was to "destabilize our democratic system." The incident is being investigated by the parliamentary advisory committee.

Germany's lower and upper houses passed changes to Germany's existing infection protection law, catering more specifically to the coronavirus pandemic. The new measures will enable the government to impose restrictions on social contact, rules on mask-wearing, drinking alcohol in public, shutting shops and stopping sports events. Advocates say the bill provides a more solid legal basis for various anti-pandemic measures. It also covers rules on school and daycare closures, and restrictions on educational institutions. Dubbed the Infection Protection Act, the law passed in the German Bundestag with a 415 majority of lawmakers backing it, 236 voting against it and eight abstaining. It then went to the Bundesrat, the upper house of parliament, where it passed with a clear majority. President Frank-Walter Steinmeier then signed it into law. Some 17,561 new coronavirus cases were reported in Germany on Wednesday, bringing its total number of infections to 833,307. The latest infection figures are a slight drop from the same day last week, when Germany reported 18,487 cases, and daily case numbers have plateaued somewhat in recent days. But infection levels are still far higher than the government deems acceptable in most of the country, and more than four times the government's own limit in Berlin itself. 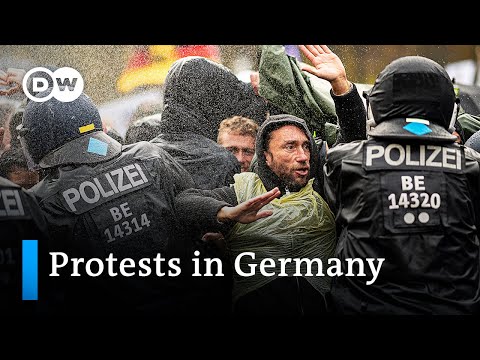