admin
Subscribe to our channel! rupt.ly/subscribe
International election observers from the Organisation for Security and Cooperation in Europe (OSCE) said that the first round of Ukraine's presidential election was "competitive", speaking at a press conference in Kiev on Monday.
According to the Chairperson of the OSCE's German delegation, “despite the many concerns we heard, also regarding potential violence, the election day was well administered and [went] without disturbances.”
“I have high hopes that the result once officially confirmed, it will be accepted by everyone. And that the second round will be just as peaceful, orderly and efficient, as what we observed yesterday,” Barnett added.
OSCE Special Co-coordinator Ilkka Kanerva noted that the "indications of misuse of state resources and vote buying undermined the credibility" of the vote, but also said that the "competitive election has led the groundwork for the vibrant second round."
With more than 80 percent of the first round votes being counted, comedian Volodymyr Zelenskiy leads the race with 30.41 percent, followed by current President Petro Poroshenko on 16.03, and former Prime Minister Yulia Timoshenko at 13.24 percent.
The runoff election between Zelenskiy and Poroshenko is set to take place on Sunday, April 21.
Video ID: 20190401-042
Video on Demand:
Contact: [email protected]
Twitter:
Facebook: 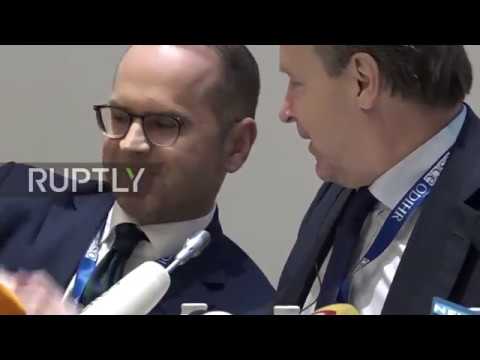 Subscribe to our channel! rupt.ly/subscribeInternational election observers from the Organisation for Security and Cooperation in Europe (OSCE) said t...