ava
This clip is brought to you by our friends at Aspiration. Sign up for free and we'll plant 10 trees at https://Aspiration.com/TYT


Trump is now signing executive orders in the wake of his temper-tantrums. Cenk Uygur and Ana Kasparian discuss on The Young Turks. Keep Hope (and TYT) Alive: http://tyt.com/go

"A draft of an executive order that President Donald Trump may sign as soon as Thursday could dramatically expand the government's ability to punish social media platforms, marking the Trump administration's most aggressive salvo yet in its battle against alleged anti-conservative bias on platforms including Twitter and Facebook.

A draft of the expansive executive order, circulated to stakeholders and obtained by Protocol late Wednesday night, would pull multiple levers of governmental power — including federal agencies, the U.S. attorney general and the White House — in order to blast the tech giants over allegations that their platforms censor conservative voices. The executive order comes on the heels of a bitter, days-long fight over Twitter's decision to fact-check one of Trump's recent tweets — and five months before the presidential election, signaling that Trump believes it could be a galvanizing issue for his base amid a pandemic that has killed more than 100,000 people in the U.S." 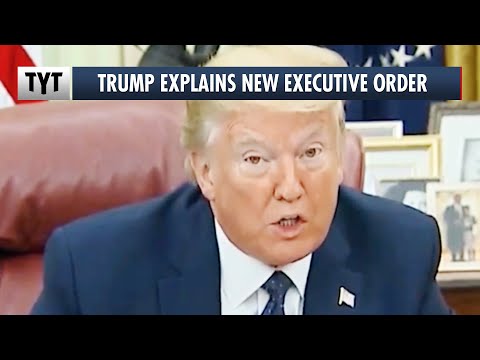 This clip is brought to you by our friends at Aspiration. Sign up for free and we'll plant 10 trees at https://Aspiration.com/TYT Trump is now signing...