Switzerland: Macron calls for rethinking of neoliberalism, warns of looming 'time of war'

admin
Subscribe to our channel! rupt.ly/subscribe
French President Emmanuel Macron took a stand against globalisation and neoliberalism in a speech at the International Labour Organization's (ILO) 108th conference in Geneva on Tuesday, calling for the world to collectively rethink capitalism saying the world was "sleepwalking" into a time of war "like in '19 and '44."
"Something is broken in the structure of this capitalism, we must face up to it, when it increasingly benefits a few but leads to territorial imbalances which are fracturing all of our democracies," he said, in a one hour speech that drew a standing ovation. "When the people, regardless of their class, do not find their share of progress, they cannot adhere to a political regime as it is. That's what's happening in our democracies. That's why some find authoritarianism so attractive."
He said of authoritarians, "They say, 'Democracy doesn't protect you against this mad capitalism's inequalities. We will protect you. We'll close borders, build walls, withdraw from multilateral projects. The others are weak. They talk a big game but don't get any results.' Our failures are feeding extremism," making a passing reference to US President Donald Trump among other 'populist' world leaders.
"As in '19 and in '44, I think, today, we are at the dawn of a time of war, if we're not careful. That war is here, in our democracies. It's the profound crisis we are living through. We can choose to sleepwalk into it," he warned. "We must consider, indeed, that the values we've been living by for so many decades have been perverted to their core."
The French president described his own speech as a "crypto-Marxist speech," saying he'd be criticised for "giving crypto-Marxist speeches at the [UN General] Assembly or at the ILO, but at home you move forward with your same reforms."
He also echoed almost word-for-word rhetoric by prominent anti-Macron Yellow Vest protesters, specifically calling to "put humanity back at the heart of" the economy, a sentiment often repeated by Yellow Vest leader Jerome Rodriguez among others.
Macron was speaking at the 108th International Labour Conference, after months of unrest in France, where hundreds of thousands of anti-government protesters have been taking to the streets every Saturday since November 2018. His party came in second behind the far-right National Rally at the European Parliamentary elections in May.
Video ID: 20190611-030
Video on Demand:
Contact: [email protected]
Twitter:
Facebook:

Switzerland: Macron calls for rethinking of neoliberalism, warns of looming 'time of war' 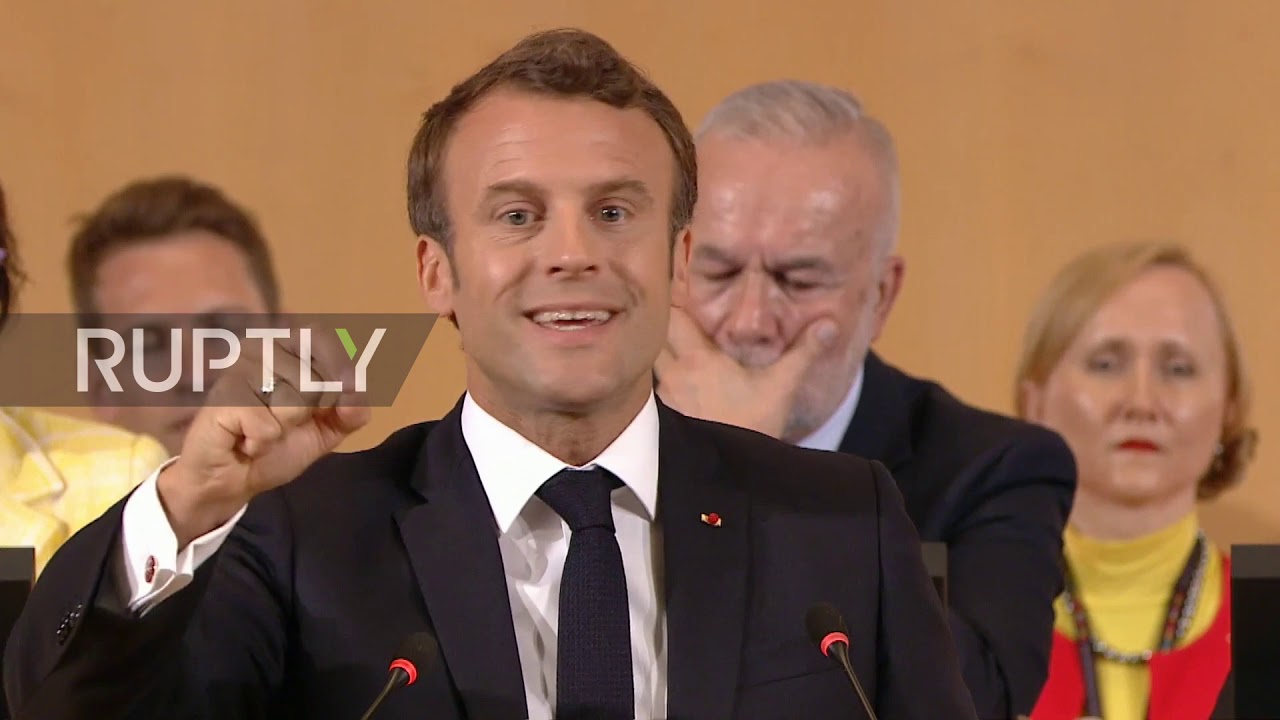 Subscribe to our channel! rupt.ly/subscribeFrench President Emmanuel Macron took a stand against globalisation and neoliberalism in a speech at the In...