Astronomers classify galaxies with unusually bright and variable centers as active galaxies. These objects can produce much more energy than the combined contribution of all their stars, including higher-than-expected levels of visible, ultraviolet, and X-ray light. Astrophysicists think the extra emission comes from near the galaxy’s central supermassive black hole, where a swirling disk of gas and dust accumulates and heats up because of gravitational and frictional forces. The black hole slowly consumes the material, which creates random fluctuation in the disk’s emitted light.

But astronomers are interested in finding active galaxies with flares that happen at regular intervals, which might help them identify and find new phenomena and events.

ASASSN-14ko was first detected on Nov. 14, 2014, by the All-Sky Automated Survey for Supernovae (ASAS-SN), a global network of 20 robotic telescopes. It occurred in ESO 253-3, an active galaxy over 570 million light-years away in the southern constellation Pictor. At the time, astronomers thought the outburst was most likely a supernova, a one-time event that destroys a star.

Six years later, scientists examined the ESO 253-3 ASAS-SN light curve, or the graph of its brightness over time, and noticed a series of evenly spaced flares – a total of 17, all separated by 114 days. Each flare reaches its peak brightness in about five days, then steadily dims.

They predicted that the galaxy would flare again on May 17, 2020, so they coordinated joint observations with ground- and space-based facilities, including multiwavelength measurements with Swift. ASASSN-14ko erupted right on schedule. Subsequent flares were predicted and observed on Sept. 7 and Dec. 26, 2020.

Using measurements of these and previous flares from ASAS-SN, TESS, Swift and other observatories, including NASA’s NuSTAR and the European Space Agency’s XMM-Newton, scientists propose the repeating flares are most likely a partial tidal disruption event.

A tidal disruption event occurs when an unlucky star strays too close to a black hole. Gravitational forces create intense tides that break the star apart into a stream of gas. The trailing part of the stream escapes the system, while the leading part swings back around the black hole. Astronomers see bright flares from these events when the shed gas strikes the black hole’s accretion disk.

In this case, the astronomers suggest that one of the galaxy’s supermassive black holes, one with about 78 million times the Sun’s mass. The orbit isn’t circular, and each time the star passes closest to the black hole, it bulges outward, shedding mass but not completely breaking apart. Every encounter strips away an amount of gas equal to about three times the mass of Jupiter. 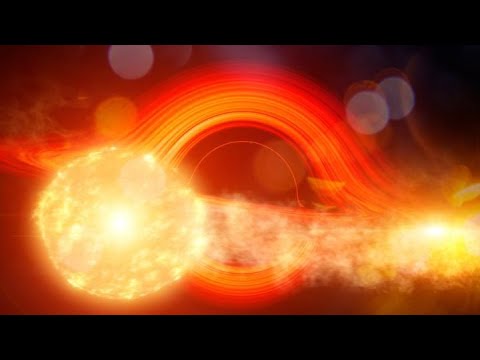