ava
Thousands protested across Poland on Friday despite coronavirus restrictions, a day after the top court banned almost all grounds for abortion in the Roman Catholic country.

Demonstrators took to the streets in cities across the country including Poznan, Warsaw, Wroclaw and Szczecin.

Over a thousand gathered near Law and Justice (PiS) ruling party leader Jaroslaw Kaczynski's house in Warsaw for the second night of protest. Dozens of police were present wearing riot gear.

The Constitutional Tribunal's ruling on Oct. 22 to ban abortions due to fetal defects ended the most common of the few legal grounds for abortion and set Poland further apart from the European mainstream.

Attempts by PiS to curb the already very restrictive abortion rules in recent years had ignited a public outcry, forcing the party to roll back legislative proposals.

Conservative values have taken a more prominent role in public life since PiS took power five years ago, and access to abortion has declined even without legislative curbs as some doctors refused to perform the procedure on religious grounds. 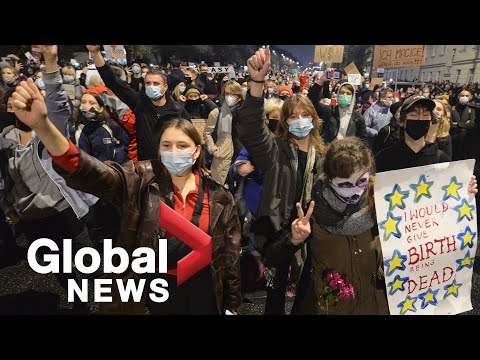 Thousands protested across Poland on Friday despite coronavirus restrictions, a day after the top court banned almost all grounds for abortion in the ...