ava
A demonstration was held in Hong Kong on Wednesday against China's enactment of a controversial national security law governing the special administrative region.

The law has fueled a widening divide between China and the U.S. and some other countries over the future of Hong Kong, a semi-autonomous Chinese territory handed over to Beijing in 1997 under a "one country, two systems" framework. The new law includes provisions for punishing those involved in the damage of government buildings and sabotaging public transportation as acts of subversion and terrorism, taking direct aim at the antigovernment protesters' strategy, seen last year when they paralyzed an airport briefly and vandalized the subway system. Those found guilty of doing so could face lengthy jail terms.

As the protest took place, Hong Kong officials gathered to mark the 23rd anniversary of the handover from English authority to Chinese, with a flag raising ceremony and a speech by leader Carrie Lam. 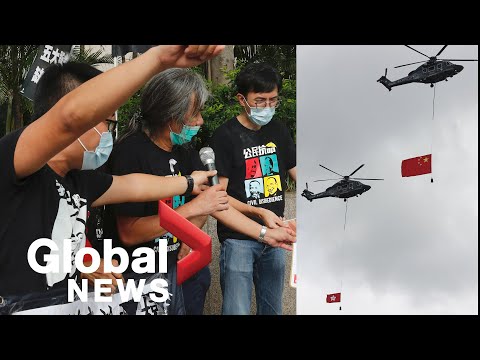 A demonstration was held in Hong Kong on Wednesday against China's enactment of a controversial national security law governing the special administra...