ava
After the death of George Floyd in police custody, activists across the US have advocated for a fundamental shift in policing. One hurdle to any significant changes in many localities are police unions, which have significant power over policies that affect police, and the local politicians who would approve and implement them.

The House passed a Democratic police reform bill Thursday as Congress struggles to find a consensus on how to respond to overwhelming public demand for law enforcement overhaul.

Democrats in the chamber approved the legislation with little Republican support by a 236-181 margin. Three GOP lawmakers voted for it.

On Wednesday, Senate Democrats blocked a separate Republican plan that they said did not go nearly far enough to root out systemic racism and violence in policing.

The measure the House passed Thursday evening would make it easier for victims of abuses to sue police and for officials to fire and prosecute officers. It would ban chokeholds and “no-knock” search warrants at the federal level, and tie funding to state and local governments to them barring those tactics. It would also require bias training and more data sharing about police use of force.

“The Justice in Policing Act is a bill for human rights in our country,” Congressional Black Caucus Chair Rep. Karen Bass, D-Calif., said of the legislation Thursday morning.

As Democrats cast the measure as a first step toward addressing the discrimination and abuses Black Americans face from police, it remains to be seen whether the full Congress can pass reform legislation. The Senate is unlikely to approve the proposal, as President Donald Trump and his GOP allies oppose a provision to roll back “qualified immunity” for officers, among other parts of the plan.

When Democrats voted not to move forward with the Senate Republican bill on Wednesday, they argued the chamber should form a bipartisan group to come up with a compromise plan. So far, the Senate has not committed to doing so, and Congress risks failing to respond to the loudest public call to root out police abuses in decades.

Sen. Tim Scott, a South Carolina Republican who led the legislation, contended Thursday that Democrats “walked away” from police reform in the Senate. He had urged them to allow debate on the bill and then propose amendments, a process Senate Minority Leader Chuck Schumer said would not resolve the proposal’s issues.

Unlike the Democratic legislation, the GOP bill would not roll back qualified immunity protections for police or make it easier to prosecute officers who commit abuses. The chokehold ban in the Republican plan is more narrow, and it calls for collecting data on no-knock warrants rather than banning them.

Neither bill meets the demands many activists have outlined since police killed 46-year-old Black man George Floyd in Minneapolis late last month, setting off weeks of protests around the world. Demonstrators have called for governments to cut at least some funding from police departments and redirect it to social services to address inequities in the job market, education and health care.

The federal government has only limited authority over the changes state and local governments can make to their police departments. It comes in part from its ability to tie conditions to funding and grants that states and municipalities receive from Washington.

But certain state and local governments have already started to take their own steps to reform policing practices. Some have passed chokehold bans or measures to improve transparency, or pledged to cut funding from their departments.

About CNBC: From 'Wall Street' to 'Main Street' to award winning original documentaries and Reality TV series, CNBC has you covered. Experience special sneak peeks of your favorite shows, exclusive video and more. 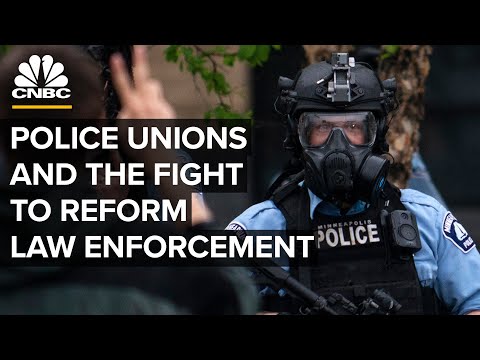 After the death of George Floyd in police custody, activists across the US have advocated for a fundamental shift in policing. One hurdle to any signi...