admin
For the past nine weeks in Serbia, thousands have been taking to the streets of Belgrade, calling for an end to what they say are President Aleksandar Vucic's authoritarian tendencies and creeping control over the media.
The protests have been dubbed "one in five million" - a name lifted directly from Vucic's own comment that "even if five million people were on the streets, [he] wouldn't cede to their demands" - and for many, they were a long time coming.
"These protests are a logical consequence of accumulated anger and dissatisfaction," says Zeljko Bodrozic, vice president at the Independent Journalists' Association of Serbia.
"Citizens saw that after several years of Vucic's reign, the story from the '90's - when he served as the minister of Information under [former President] Slobodan Milosevic - was being repeated. We no longer live in war hysteria now, but Vucic practices the same politics, just with other means and in a more subtle way".
The anti-government demonstrations are the biggest since the fall of Milosevic in 2000, not that you would know that from watching the coverage on RTS, Serbia's public broadcaster.
The weekly protests deliberately chart a course that stops right in front of the RTS building, yet they only get a two-minute bulletin at the very end of the channel's half-hour newscast. For some critics, it is a tangible sign that programming is completely in the hands of the ruling party.
We no longer live in war hysteria now, but Vucic practices the same politics, just with other means and in a more subtle way.
Zeljko Bodrozic, vice president, Independent Journalists' Association of Serbia
"The protesters want RTS to stop being state television and take on more of a public service role where every social group, even if it criticises the government, can and should have its place. Vucic knows very well that the media are a very strong government tool and I think this is why so much has been done to control the media, why we don't have critical programmes and why most of the mainstream news is undercover propaganda and manipulation," explains Tanja Maksic of the Balkan Investigative Reporting Network.
Ever since coming to power in 2012, Vucic has been accused of using a host of administrative, political and financial measures to reign in media outlets, public and private, that do not toe the official line. Critics in Belgrade have raised concerns over the deteriorating state of press freedom on the international stage, but say their concerns are falling on deaf ears.
Filip Swarm, executive editor at Vreme, warns that in the midst of Serbia's bid for EU membership, politicians in Brussels care more about Serbia's stability, than about the country's media freedom.
"Aleksandar Vucic's regime is what is called stable-ocracy. For the EU, the important thing is that there is no shooting. The important thing is that we are not at war with our neighbours. Apparently democratic freedoms, the state of human rights, and freedom of the media do not interest them anymore."
The Vucic administration maintains that it is drafting new legislation aimed at improving conditions for Serbian journalists. But many fear this new set of laws will be just another list of unfulfilled promises aimed to please the European Union, doing little to satisfy the demands of the protesters who have been marching Belgrade's streets for weeks.
Contributors
Aleksandar Gajovic - state secretary, Ministry of Culture and Information
Zeljko Bodrozic - vice president, Independent Journalists' Association of Serbia
Filip Svarm - executive editor, Vreme
Tanja Maksic - Balkan Investigative Reporting Network (BIRN)
- Subscribe to our channel:
- Follow us on Twitter:
- Find us on Facebook:
- Check our website: 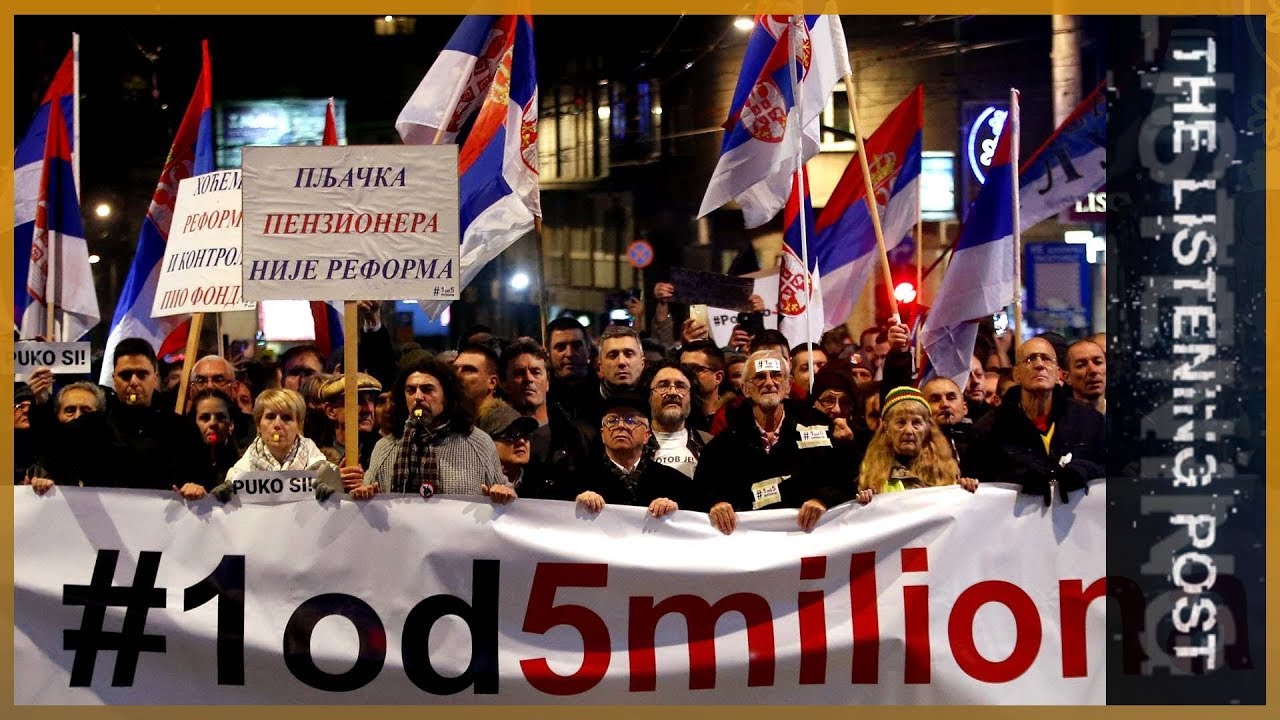 For the past nine weeks in Serbia, thousands have been taking to the streets of Belgrade, calling for an end to what they say are President Aleksandar...