New Evidence Could Rewrite the History of Human Bipedalism

ava
You might want to take a seat for this one: humans walked on two feet way earlier than we previously thought.
» Subscribe to Seeker! http://bit.ly/subscribeseeker
» Watch more Elements! http://bit.ly/ElementsPlaylist
» Visit our shop at http://shop.seeker.com

While many of us likely walk at least a little bit every day without giving it much thought, anthropologists and paleontologists actively think about walking…a lot.

And new fossil evidence adds some serious twists and turns to the evolution of human mobility.

Historically, it’s been difficult to tell when walking exclusively on two feet came to be, but a recent ancient ape discovery added a significant new piece to the puzzle offering new clues to the evolution of two-legged walking.

A team of paleoanthropologists unearthed a new ancient ape species, which they’ve named Danuvius guggenmosi. This species lived in what’s now Germany approximately 11.6 million years ago and its anatomy suggests that it moved in a really exciting way—what these researchers are calling ‘extended limb clambering,’ or the equal use of both its upper and lower limbs.

This new finding represents the missing link in the evolution of primate movement. Up until very recently, we’ve been pretty much in the dark about exactly when and how bipedalism evolved.

Find out more about the discovery of Danuvius guggenmosi and how this new found data will inform our understanding of human evolution in this Elements.

Did apes first walk upright on two legs in Europe, not Africa?
https://www.newscientist.com/article/2222656-did-apes-first-walk-upright-on-two-legs-in-europe-not-africa/
"The idea that hominins, or bipedality, evolved in Europe isn’t widely accepted, largely because the evidence is fragmentary. Böhme says the discovery of D. guggenmosi is “a game changer”, but many remain skeptical."

Why aren't humans 'knuckle-walkers?'
https://phys.org/news/2018-03-humans-knuckle-walkers.html
"'In running humans, these reaction forces, can be multiples of body weight on a single supporting foot,' he said. 'That's why we have a uniquely human adaptation the arch in our foot—it's a shock absorber.' This also why the old saw rings true that people with flat feet can't join the infantry, Latimer said."

Elements is more than just a science show. It’s your science-loving best friend, tasked with keeping you updated and interested on all the compelling, innovative and groundbreaking science happening all around us. Join our passionate hosts as they help break down and present fascinating science, from quarks to quantum theory and beyond.

Seeker empowers the curious to understand the science shaping our world. We tell award-winning stories about the natural forces and groundbreaking innovations that impact our lives, our planet, and our universe.

New Evidence Could Rewrite the History of Human Bipedalism 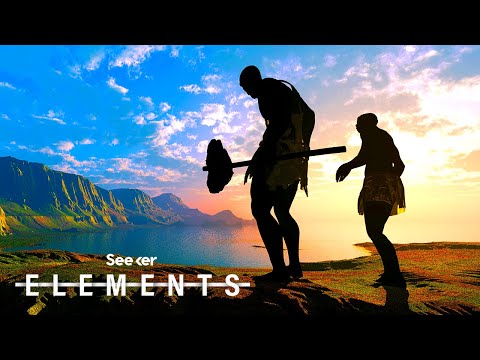 You might want to take a seat for this one: humans walked on two feet way earlier than we previously thought. » Subscribe to Seeker! http://bit.ly/sub...