ava
For the first time ever, scientists using NASA's Fermi Gamma-ray Space Telescope have found the source of a high-energy neutrino from outside our galaxy. This neutrino traveled 3.7 billion years at nearl-light speed before being detected on Earth -- farther than any other neutrino for which we know the origin.

High-energy neutrinos are hard-to-catch particles that scientists think are created by the most powerful events in the cosmos, like galaxy mergers and material falling onto supermassive black holes. They travel a whisker shy of the speed of light and rarely interact with other matter, so they can travel unimpeded across billions of light-years.

On Sept. 22, 2017, the IceCube Neutrino Observatory at the South Pole detected signs of a neutrino striking the Antarctic ice with an energy of about 300 trillion electron volts -- more than 45 times the energy achievable in the most powerful particle accelerator on Earth. This high energy strongly suggested that the neutrino had to be from beyond our solar system. Backtracking the path through IceCube indicated where in the sky the neutrino came from, and automated alerts notified astronomers around the globe to search this region for flares or outbursts that could be associated with the event.

Data from Fermi's Large Area Telescope revealed enhanced gamma-ray emission from a well-known active galaxy at the time the neutrino arrived. This active galaxy is a type called a blazar, where a supermassive black hole with millions to billions of times the Sun's mass blasts particle jets outward in opposite directions at nearly the speed of light. Blazars are especially bright and active because one of these jets happens to point almost directly toward Earth.

Fermi showed that at the time of the neutrino detection, the blazar TXS 0506+056 was the most active it had been in a decade.

The discovery is a giant leap forward in a growing field called multimessenger astronomy, where new cosmic signals like neutrinos and gravitational waves are definitively linked to sources that emit light.

This video is public domain and along with other supporting visualizations can be downloaded from the Scientific Visualization Studio at: https://svs.gsfc.nasa.gov/12994 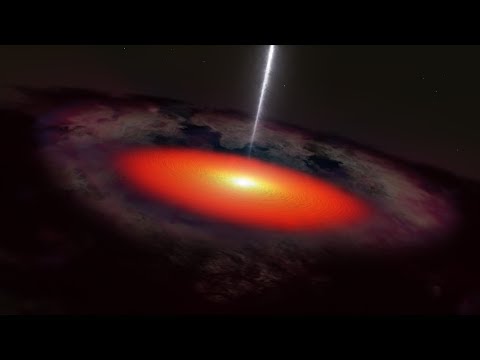 For the first time ever, scientists using NASA's Fermi Gamma-ray Space Telescope have found the source of a high-energy neutrino from outside our gala...