ava
Meet the fleet of next-generation autonomous robots that are modeled entirely after insects, and one in particular: the fly. Designed with speed and agility in mind, Robofly relies on nature’s wisdom to fly tether-free.
» Subscribe to Seeker! http://bit.ly/subscribeseeker
» Watch more Elements! http://bit.ly/ElementsPlaylist
» Visit our shop at http://shop.seeker.com

Robofly has wings, a “brain,” and the winged robot is able to make decisions completely on its own. Robofly is the world’s first insect-sized drone able to wirelessly take flight and it’s a member of an entirely new class of flying robots. Its specialties aren’t limited to the sky, it can also navigate obstacles on land and in the water, too.

And who is behind this latest innovation?

A team from the Autonomous Insect Robotics Laboratory, or AIR Lab, at University of Washington whose founding goal was to build a new class of autonomous robots modeled entirely after insects.

Using nature as a guide for human-built systems and structures is a practice known as biomimicry. The idea is that we can solve our difficult design problems by looking at how nature solves them. In the case of tiny autonomous bots, this can include things like figuring out what wing shape is most aerodynamic, or even how to mimic the mechanical performance of natural muscles and develop biological systems within robots so that they can power themselves.

Find out more about how these winged robots will be engineered to mimic nature and how biomimicry can help us design more sustainable energy storage systems in this Elements.

Exploring engineering’s limits to build a mobile microbot colony
https://harvardmagazine.com/2017/11/robobee-harvard
"Not all the challenges inherent to building the bee have proven as tractable. Shrinking an energy source, even one that will let the bee fly for just a minute or two, is exceedingly difficult. Given the voltage requirements, wing shape, flapping frequency, battery weight, and so on, Wood calls powering the RoboBee “a complex, multi-dimensional optimization problem.'"

RoboFly: An insect-sized robot that can fly, walk and drift on water surfaces
https://techxplore.com/news/2020-01-robofly-insect-sized-robot-drift-surfaces.html
"The tiny robot created by Chukewad and his colleagues is an adaptation of RoboBee, a flying micro-robot prototype that Sawyer Fuller, senior author and principal investigator on the study, helped to develop at Harvard University before he started working at the University of Washington. A key improvement of RoboFly is that it has fewer components, as the researchers found that assembling too many parts made its fabrication overly complex."

Unleashed, Robo-Insect Takes Flight
https://www.nytimes.com/2019/06/26/science/robot-insect-flight-engineering.html
"And once these tiny robots are able to zip up, down and sideways outdoors, they could be used to take air quality measurements, help search collapsed buildings for survivors, or even be deployed in swarms." 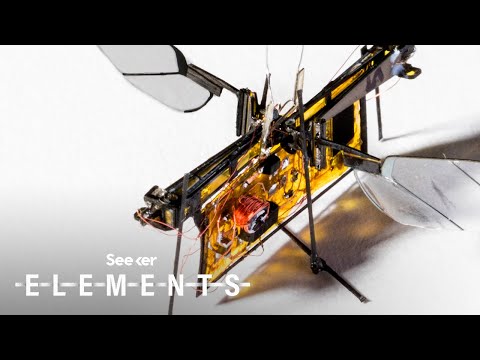 Meet the fleet of next-generation autonomous robots that are modeled entirely after insects, and one in particular: the fly. Designed with speed and a...