ava
NASA’s Human Space Flight Network stands ready to support the launch of astronauts from U.S. soil for the first time since the end of the space shuttle program in 2011, coordinating communications across multiple network elements to provide robust and reliable communications to the crew. Overseen by the Space Communications and Navigation (SCaN) program, NASA’s communications networks are supporting this historic human spaceflight milestone, just as they will support all commercial crew missions.

One of those elements, NASA’s Space Network, consists of a constellation of relay communications satellites and ground stations to provides data and voice communications. Thanks to the Space Network, SpaceX’s Dragon crew and spacecraft will stay connected to the ground and the International Space Station from launch to station docking, through re-entry and splashdown. NASA recently made improvements to the Space Network to enhance relay satellite pointing capabilities to actively respond to potential abort scenarios.

In addition to communications services, NASA’s Search and Rescue office has joined with the Human Space Flight network to provide the Commercial Crew Program with responsive location services through the international search and rescue network, Cospas-Sarsat. The crewed Dragon is equipped with an emergency beacon that can provide an accurate location anywhere in the world near-instantaneously upon activation. Each crew member is also equipped with a personal locator beacon to be used in the event they need to egress from the capsule prior to nominal recovery.

The Human Space Flight Communications and Tracking Network, managed out of Goddard, has long supported commercial missions to the space station, facilitating berthing and docking of visiting cargo and logistics missions and, now, crewed vehicles. The office synthesizes the capabilities of NASA networks into comprehensive communications services for human exploration missions. They facilitate continuous communications for the space station through the Space Network, and will support the Artemis missions to the Moon through all three of NASA’s major networks: the Near Earth Network, Space Network and Deep Space Network.

NASA’s SCaN program office, based at NASA Headquarters in Washington, DC, is responsible for the management and oversight of all of NASA’s communications networks, as well as the development of advanced space communications and navigation technologies.

This video is public domain and along with other supporting visualizations can be downloaded from NASA Goddard's Scientific Visualization Studio at: https://svs.gsfc.nasa.gov/13624 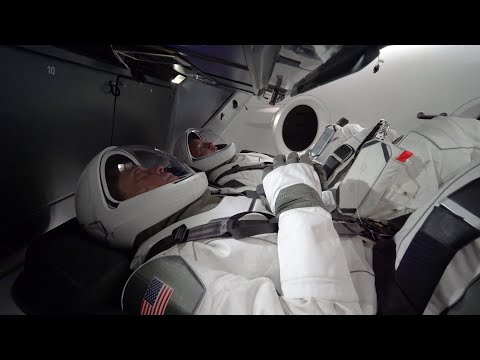 NASA’s Human Space Flight Network stands ready to support the launch of astronauts from U.S. soil for the first time since the end of the space shuttl...