The annual Pride March in the Twin Cities (Minneapolis - St. Paul) has been cancelled due to COVID-19 but demonstrators with TCC4J (Twin Cities Coalition for Justice for Jamar) have taken to the streets to show their support not only for the Pride movement, but to issue a call to address systemic racism and address violence against Trans people of colour.

The coalition was formed in 2015 by community activists with the mission of "getting the police who killed Jamar Clark prosecuted" and standing against "injustice and exploitation" according to their Facebook page.

Jamar Clark, a 24-year-old Black man, was shot by Minneapolis Police in Minneapolis, Minnesota on November 2015.

This year the TCC4J has called for protests in the Twin Cities (Minneapolis - Saint Paul) to support black Trans community and demand action to bring justice for George Floyd.

Floyd died after a white police officer knelt on his neck for nearly nine minutes while other officers pinned him to the ground.

His death sparked weeks of global protests against anti-Black racism and police brutality. 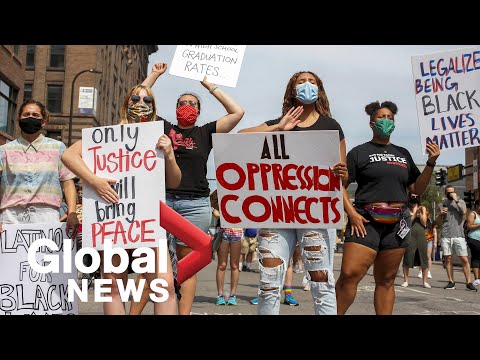