ava
Minneapolis Mayor Jacob Frey, city council vice-president and councillor Andrea Jenkins, police chief Medaria Arradondo and other officials held a press conference on Thursday to speak about the violent protests that had erupted in the city the night before in response to the death of George Floyd, a Black man who died in police custody after an officer knelt on his neck until he was unresponsive.

Frey held back tears discussing the death and protests, saying that the emotion seen was the result of “so much anger and sadness” ingrained in the black community, not just from Floyd’s death but 400 years of racial inequality. He said the anger was not just understandable but “right,” and called on people in the city to offer “radical love” and for non-black communities to understand that anger.

Jenkins said that the black community throughout America “feel as if there was a knee on all of our collective necks." She said that while there is grief over Floyd's death, she said violence can not be allowed in the city in response to his death.

Arradondo stressed he recognizes there is a “deficit of hope” that his own department has contributed, to but said he would not allow people to commit acts that are criminal, from looting businesses to setting buildings on fire. 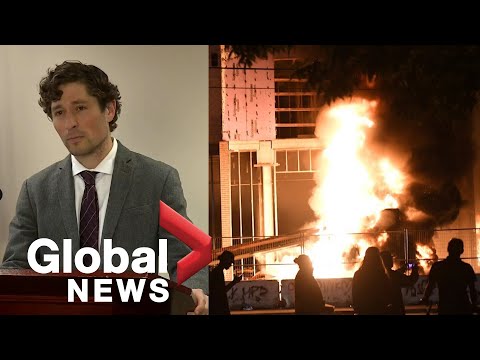