Added 4 months ago by admin
24 Views
Was WikiLeaks founder Julian Assange sold out by Ecuadoran President Lenin Moreno? And why have Moreno’s policies so drastically changed from what he professed before taking office? Rick Sanchez interviews Ecuador’s former Minister of Foreign Affairs, Ricardo Patiño, who engineered WikiLeaks founder Julian Assange’s years-long asylum in the Ecuadoran embassy in London, UK. He argues that Moreno was blackmailed by forces in Washington to betray Assange and the people of Ecuador.
Then RT’s Yulia Shapovalova reports on the Russia-Africa Summit and Economic Forum in Sochi, Russia. RT’s Murad Gazdiev reports on the symbolic touchdown of Russian Tupolev Tu-160 “White Swan” bombers in South Africa. RT America’s Rachel Blevins explains a court decision to allow a Texas mother to reassign the gender of her child without the permission of the child’s father.
RT America’s Natasha Sweatte discusses big tech’s attempts to help solve California’s housing crisis. Plus, Rick Sanchez reports on a former NASA scientist's insistence that life is already known to exist on Mars.
#QuestionMore #RTAmerica #NewsWithRickSanchez
Find RT America in your area:
Or watch us online:
Like us on Facebook
Follow us on Twitter 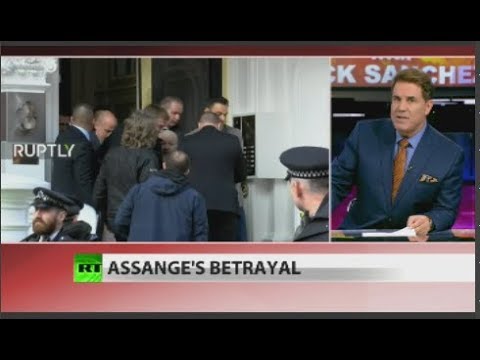 Was WikiLeaks founder Julian Assange sold out by Ecuadoran President Lenin Moreno? And why have Moreno’s policies so drastically changed from what he ...