Echoes of the Universe's Creation

ava
Sound waves from the nascent universe, called baryon acoustic oscillations (BAOs), left their imprint on the cosmos by influencing galaxy distribution. Researchers have explored this imprint back to when the universe was three billion years old, or roughly 20% of its current age of 13.8 billion years.

For most of its first half-million years, the universe looked extremely different than it does today. Instead of being speckled with stars and galaxies, the cosmos was filled with a sea of plasma – charged particles – that formed a dense, almost uniform fluid.

There were tiny fluctuations of about one part in 100,000. What few variations there were took the form of slightly denser kernels of matter, like a single ounce of cinnamon sprinkled into about 13,000 cups of cookie dough. Since the clumps had more mass, their gravity attracted additional material.

It was so hot that particles couldn’t stick together when they collided – they just bounced off each other. Alternating between the pull of gravity and this repelling effect created waves of pressure – sound – that propagated through the plasma.

Over time, the universe cooled and particles combined to form neutral atoms. Because the particles stopped repelling each other, the waves ceased. Their traces, however, still linger, etched on the cosmos.

When atoms formed, the ripples essentially froze in place, carrying within them a bit more matter than the average across the universe. With the repulsive pressure of the plasma gone, gravity became the dominant force.

Over the course of hundreds of millions of years, clumps from the plasma that once filled the universe slurped up more material to become stars. Their mutual gravity pulled stars together into groups, ultimately forming the galaxies we see today. And slightly more galaxies formed along the ripples than elsewhere.

While the waves no longer propagated, the frozen ripples stretched as the universe expanded, increasing the distance between galaxies. By looking at how galaxies are spread out in different cosmic epochs, we can explore how the universe has expanded over time.

Scientists have noticed a pattern in the way galaxies cluster together from measurements of the nearby universe. For any galaxy today, we are more likely to find another galaxy about 500 million light-years away than slightly nearer or farther.

Music: "Pulse and Glow" from Adrift in Time, written and produced by Lars Leonhard.

This video is public domain and along with other supporting visualizations can be downloaded from NASA Goddard's Scientific Visualization Studio at: https://svs.gsfc.nasa.gov/13768

Echoes of the Universe's Creation 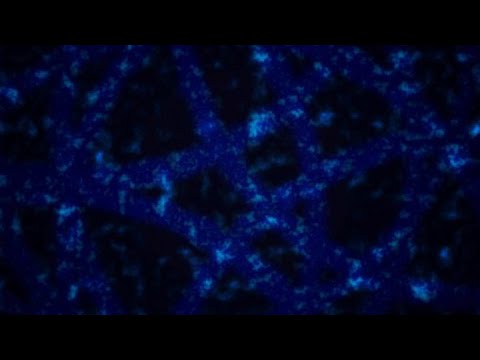