admin
Hundreds of cabbies drove their taxis down Sofia’s Tsarigradsko Shose boulevard in a procession on Thursday, in protest against what they see as unfair competition from Russian car-ride service Maxim.
The protest, which was organised by the Syndicate of Taxi Drivers, made its way to Sofia’s Saint Alexander Nevski cathedral, where protesters gathered and held speeches against the company.
Maxim has been operating in the country since 2014 and began as a taxi-booking app. The taxi drivers believe the company flouts regulations concerning those who are able to offer paid car-ride services.
Taxi driver and protester Vladimir Chernev expressed frustration at Maxim, asking: “why did the authorities ban Uber, but are now letting those Russians work here? I suggest because they initially started as an app for regular taxis."
"This is not fair, not normal. We have to pass tests, exams. They just get a [random] car, [its driver can] go to the address and start to earn money," said another taxi driver.
Uber’s operations were banned in the country in 2015 on the basis of “unfair competition” by the Commission for the Protection of Competition, after the introduction of the service in 2014 sparked an outcry from Bulgarian taxi companies.
Subscribe to our channel! rupt.ly/subscribe
Video ID: 20190321-047
Video on Demand:
Contact: [email protected]
Twitter:
Facebook: 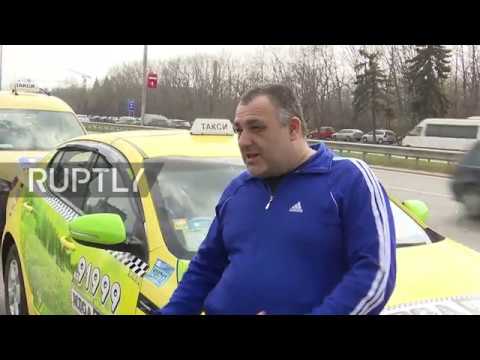 Hundreds of cabbies drove their taxis down Sofia’s Tsarigradsko Shose boulevard in a procession on Thursday, in protest against what they see as unfai...