ava
Fire officials provided an update on the ongoing efforts to combat wildfires in British Columbia on Sunday.

Penticton, BC fire chief Larry Watkinson said on Sunday during an update on the wildfires burning in the province that the threat to homes and businesses from the Christie Mountain wildfire was "pretty limited" because of the work done ahead of time.

He said they raised the humidity around the homes in the vicinity of the fire to the point they haven't seen other ignitions aside from small brushes they were able to extinguish.

He added they had fires that burned up to lines they established, in which they removed vegetation and other materials fires could use as fuel, but flames did not ignite the homes.

Officials say the fire is approximately 2,000 hectares, though rocky terrain makes it difficult to size.

Watkinson brought what could be seen as good news on Saturday, saying they were able to send the majority of the out-of-town units back to their communities and were feeling confident the fire would stay out of the city.

BC Wildfire officials did caution Saturday, however, that while there was good news in terms of the fire's lack of substantial growth, they were not lifting the evacuation order yet and would not do so until they were "comfortable" with the current fire situation. 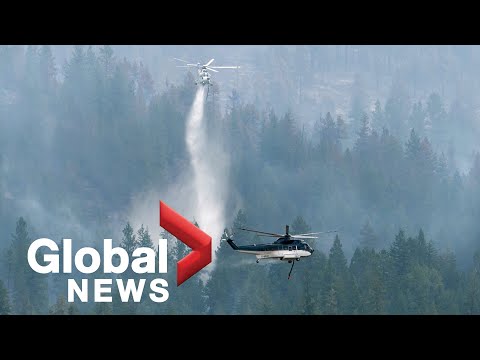