ava
History has shown, time and again, that the role of the media during a pandemic can be crucial, not only to our understanding of the issues at stake but to our survival as well.

John M Barry is an American historian and author of the New York Times bestseller, The Great Influenza: The Epic Story of the Deadliest Pandemic in History.

In an interview with The Listening Post's Nicholas Muirhead, he looks back on how the US media covered the outbreak of Spanish Flu in 1918, how news organisations, through self-censorship and misinformation, helped spread the virus, and how, more than, a century later we are seeing some disturbing parallels in the news coverage today.

The Spanish Flu claimed anywhere from 50 to 100 million lives and was spread around the globe, in large part by soldiers returning home from World War I. It was not called the "Spanish Flu" because the first cases were detected in Spain but rather because of how the story was reported.

In the countries that were at war, journalists were largely censored and therefore prohibited from covering the true scale of the outbreak. The fear was that news of a deadly disease would damage morale and signal weakness to the enemy.

In Spain, which was neutral during the war, journalists were free to report the story, and when King Alfonso XIII caught the virus, it received an enormous amount of publicity. From then on, the pandemic was known as the Spanish Flu.

Though the war was coming to an end by the time the disease arrived in the US, the media were still largely self-censoring. For instance, in Philadelphia, when the biggest parade in the city's history was planned to celebrate the end of the war, the medical community warned journalists it should be cancelled.

Barry told Muirhead: "Reporters were writing stories, editors were killing the stories." The parade went ahead, attended by hundreds of thousands of people, and 48 hours later (the typical incubation period of influenza) people started falling ill.

"The disease really exploded in the city," Barry said adding, "and that happened to be one of the hardest-hit cities in the country, if not the world."

When news of the coronavirus outbreak first started circulating in the US, President Donald Trump largely downplayed the severity of the outbreak. He told Americans the disease would disappear and his administration had everything under control.

Those talking points were largely mirrored in the coverage on Fox News, the most-watched TV channel in the country.

Barry is reluctant to call the rhetoric coming out of either the White House or Fox News outright lies, as it was in 1918. However, with the benefit of hindsight, he now has one simple message to governments trying to contain the outbreak and journalists trying to cover it: "Telling the truth bluntly and transparently, letting people know what they can expect as truthfully as we know it, will only help us deal with it."

Sometimes it helps to look back to know the best way forward.

John M Barry - Author, The Great Influenza: The Epic Story of the Deadliest Pandemic in History 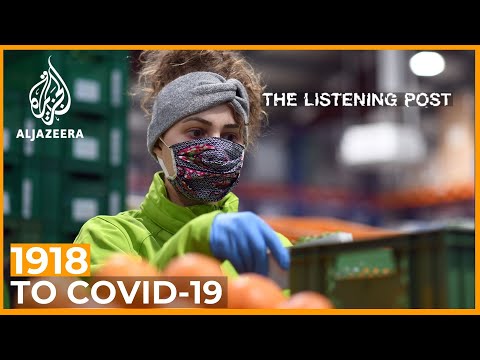 History has shown, time and again, that the role of the media during a pandemic can be crucial, not only to our understanding of the issues at stake b...